Posted by DDH Staff on 6/3/2009 to
A little clarification for re-modelers out there: A lot of older homes use the old skeleton key type lock where there is a box (called a mortise box) mounted inside the door and the knobs mount to a spindle inserted through the mortise box. We have a lot of customers that need just the knobs and spindle replaced. Here is a link to just the knobs and spindles: http://www.directdoorhardware.com/NostalgicWare/Index_Knobs.htm If you need to replace the whole entire set, you can purchase a new mortise box with knobs, spindles, and backplates. Find complete skeleton key locks here.??On that page you can choose from many styles, then choose the mortise function. In ?my opinion, if you are replacing the knobs, you may as well replace the whole set-up and have some nice smooth functioning knobsets. Replacing the knobs does make an immediate cosmetic difference, but those old mortise boxes get worn out and tend to have a lot of play in them. A new mortise box will operate smoothly, yet feel solid. But, luckily for those of us on a budget, you can just buy the knobs separately, or even the backplates (found here), or even just the mortise box. 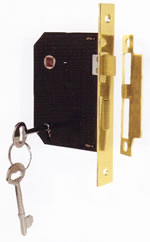 The second kind of mortise lock is often confused with the first, so I thought I'd clarify a little in this blog post. Mortise Entry Sets also use a mortise box that slides in the edge of the door, but they do not use a skeleton key like the vintage mortise locks. The Mortise Entry Sets or Handlesets have a larger box that connects the lower knob or lever handle and the deadbolt lock above. These type of mortise locks are much more expensive than than standard tubular latch sets that most of us have in our homes. There are several advantages to mortise entry sets. One of the more popular styles that we sell are the Emtek Mortise handlesets. These locks have a larger than standard deadbolt throw for added security and lock at the doorknob or lever latch as well. These mortise locks also have an option that allows you to keep the door locked at all times so that when you leave the home it will lock behind you. The added security and smooth operation of mortise locksets make them a popular choice, but since they require more preparation than the standard lockset, they won't work for every situation. Emtek also makes decorative plate locks in the mortise function. You'll notice in the example below that the latch on the edge of the display is long and rectangular with deadbolt and lever latch towards the center, where a standard sideplate would have two separate tubular latches top and bottom. 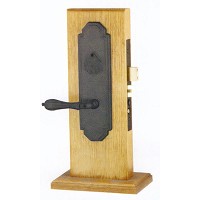