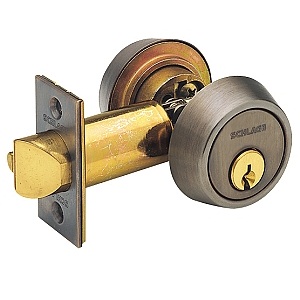 The Schlage single cylinder B250 gatelatch or nightlatch is basically a deadbolt that latches behind you when you leave. You can see the difference between a regular deadbolt latch and the B250 gatelatch in the picture below, 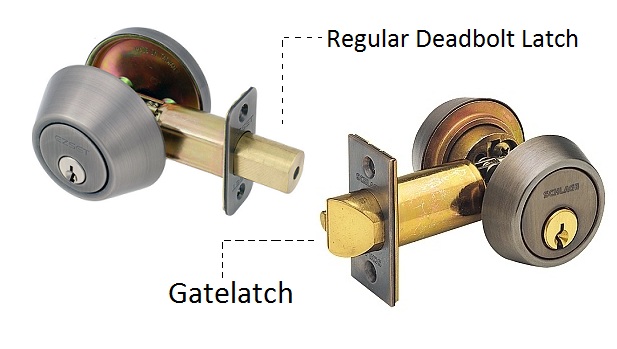 The B250 latch is kind of like an entrance lever or door knob latch, where you can close the door (or gate) behind you and there is no need to turn a knob for it to latch. Compare it to a regular deadbolt latch, where you have to manually turn the inside thumb turn or outside key to bolt the door shut. Don't try and shut the door when that deadbolt latch is engaged, or you might end up with a dent in your door jam. The main purpose of the B250 deadbolt is to use it on a gate (hence the name gatelatch) for condos or apartment buildings where it is necessary to keep the door locked after exiting. Maybe for like a pool or maybe a utility room. This way there is no need to require occupants to have a key to exit, there is a turn piece from the inside that you simply turn to exit, and the outside keyed cylinder always stays locked behind them after they exit. And this is also a great idea for emergency reasons, because you don't want someone to have to try and find a key to exit in case of emergency like a fire for example. The B250 gatelatch is available as a single cylinder deadbolt, which means it has a keyed cylinder only on the outside. And this deadbolt is also reversible, which means you don't have to worry about handing when ordering. That makes ordering a lot easier. The gatelatch is also available in Satin Chrome, Oil Rubbed Bronze, or Bright Brass.
SHARE THIS POST
Previous Post
Next Post