Latch Comparisons: Which one is Right for You?

While most door latches function similarly, there are many types for home builders, contractors, and business owners to choose from. With such a wide variety on the market, choosing one can feel overwhelming. Some doors may be purchased with door hardware, but there are many reasons why you may wish to change a door latch?—better aesthetics or security features being the most common. It's important to us that you have all the details needed to make the right choice for your next door project or upgrade. So, if you're trying to figure out which type of locks suit you, we can help with our latch comparison guide below.

What are Door Latches?
It's not unusual for those outside the home building and construction business not to know all parts of doors intimately. For most of us, they open, close, and sometimes lock, and we never tend to think much further than that until an issue arises. So here is a quick explanation:

A door latch is mechanical hardware used to fasten a door shut and keep it closed. Door latches use a fastener attached to two ordinarily separated surfaces, most often located on the door itself and then the door frame, to prevent the door from swinging while allowing regular operation when the latch is released.

What Are the Most Important Parts of a Door Latch?
Door latches will vary by manufacturer, however, the anatomy of a typical door latch found in homes or businesses contains three essential parts: the bolt, the box, and the strike plate.

Cam Latch vs. Compression Latch
A cam latch is a simplistic and budget-friendly locking mechanism. Cam latches consist of a body that is usually attached to a moving panel or a door and incorporates a cam lever that can be rotated to engage a non-moving or fixed panel. Closing the door causes the cam to rotate behind the fixed panel and secures the moving panel or door to remain shut.
The cam lever is operated by simply twisting or turning motion by hand on a door knob or by a tool.

A compression latch is almost identical in terms of functionality to a cam latch. It's composed of a body and cam lever that can be turned by hand or tool. However, this door latch works by creating a clamping force between two surfaces. This compression between the two panels also prevents vibration or rattling as the pressure can provide the needed sealing to prevent dust or moisture from seeping into the latch and damaging it.

If you're looking for a cost-effective door latch, the cam latch will undoubtedly suit you well. If you want a door latch that can withstand the weather and reduce vibrations or rattling, you might prefer the compression latch better.

Slam Latch vs. Draw Latch
A slam latch is also known as a push-to-close latch. These hold doors or panels securely by pushing the door closed. It's known as a slam-latch due to its natural ability to resist almost any damage, even when a door or panel is slammed shut. Unlike the cam or compression latch, a handle on a slam latch doesn't need to be turned for the latch to engage.
Slam latches are spring-loaded latches that utilize a specifically designed spring for tactile resistance. The design at its most basic entails an enclosed spring mechanism with a sliding pin pushed by the spring and a separate component with a notch or curve.

Draw latches operate on the principle of drawing items together and using tension to keep them together. The main components of a draw latch assembly are the blade, a hooked plate or wire-formed loop, a keeper, and a hinge. The tension is created when the edge is hooked to the keeper and clamped down.

Slam latches are ideal in industrial spaces and for equipment where latch reliability is crucial, such as construction, transportation, car doors, truck beds, RV doors, and home or business doors that see heavy-duty use.

Draw latches are ideal for securing enclosures to prevent tampering on items such as trailers, HVAC systems, cargo containers, machinery, storage compartments, and lids.
Both types of latches would work exceptionally well in an industrial business.

Tubular Latches vs. Flat Latches
One of the most commonly used door latches inside homes is called tubular latches, also known as mortice latches. The name stems from how this latch is installed or morticed into the door itself. The latch is controlled by a doorknob or door handle. When the knob or handle is engaged, the latch bolt, or 'tongue' of a triangular metal, retracts to open the door. When the door is shut, it springs back to close or latch the door closed.

Tubular latches are one of the most affordable indoor latch types available today but tend to have a shorter life span than other tubular latch types, such as double-sprung and heavy-sprung, which tend to be more robust and more durable.

Functional yet economical, a tubular latch is an excellent choice for most indoor homes with doors that may not see a lot of use and wear.
Suppose your home or business will be seeing regular, heavy-duty use of doors with them being opened and closed multiple times a day. In that case, we recommend considering flat latches due to their stainless steel material and much more rugged construction.

Whatever door hardware you need, you can depend on Direct Door Hardware to have what you need, from information, door latch comparisons, and much more. Do you still have questions? Feel free to contact us; we'd love to help. 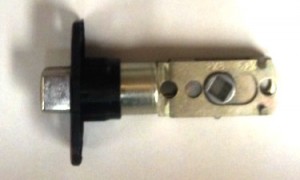 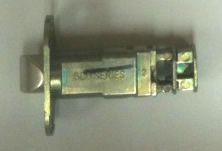