What kinds of Strike Plates Are There?

Posted by DDH Staff on 6/20/2012 to Tips
The strike plate is the little plate that goes in the door jamb where the latch or plunger would lock into. This piece is pretty important believe it or not. Without it, you wouldn't be able to tap the door and it automatically lock into place. This piece helps guide the latch into the hole in the door jamb, without having to turn the door knob or lever. It keeps the door in place until the door knob or lever is turned which releases the latch. To fit the strike plate inside the door jamb, the wood has to be chiseled out to match the shape of the strike - making sure it's flush to the jamb. Simple enough, but what kinds of strike plates are there? Full Lip Strike:

The full lip strike is the most common. As you can see there are 2 different kinds of full lip strikes: round corner or square. The measurement that this strike plate is showing would be considered the width, because it would be the width if it was on the door jamb. The width is measured from the screw hole to the edge, like shown above.   Extended Lip Strike: 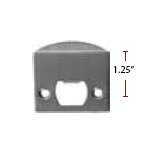 Extended lip strikes look similar to the full lip, except it€™s a lot wider. Sometimes doors require a deeper strike, possibly because the door is wider than the standard size.   T-Strike: 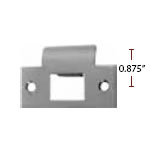 Can you tell by the name why it€™s possible they named this style the T-strike? This is just another style of strike that some doors may already be prepped for. It€™s not very common someone specifically asks for a T-strike just because, it€™s usually because it€™s already prepped that way.   Circular Strike:

The circular strike is kind of a funny looking style, but if your door jamb is already prepped this way it will pretty much save your life.   Deadbolt Strike:

Deadbolt strikes are obviously different. They are used for the deadbolt, and they don€™t require a lip because the bolt doesn€™t strike on the plate like the latch does on the strike plates. It basically covers the part of the jamb where the hole would be and the bolt would lock into place. Dresses it up a bit.   Most of the hardware comes standard with the full lip strike, but are available with pretty much any of the styles listed upon request.
SHARE THIS POST
Previous Post
Next Post