Posted by DDH Staff on 11/17/2010 to Lever Handles
Installing a commercial door lever is a little intimidating at first, but it's really quite simple once you understand how the lock assembly works in the door. They are even more challenging to install in doors that are prepped for residential locks. Commercial doors are generally prepped a little differently as the heavy duty locks used in commercial construction are a bit bulkier. I recently installed some ezset commercial levers and took some pictures along the way to help illustrate how they are installed. Commercial Locks like these are cylindrical locks which means that they have a cylindrical housing that fits into the bore hole. The latch then attaches to that cylinder. Cylindrical locks are a more stout than your regular tubular latch type lock, so they hold up better in commercial applications. This type of commercial lock is designed to fit a 2 1/8" bore hole, but two additional holes are required - one above the bore hole, one below. Other Commercial locks from Schlage, Falcon or other brands will also require this same type of preparation. To prep the bore for the new lock, you'll need to drill these holes. You can either measure, or use the template included in the package. You can see the supplied template has both standard backsets marked out. Just line up the edge, and center the circle over the bore hole. Pretty easy to do if you have some light shining behind the door. Now drill your holes. Since I installed these locks on steel residential doors, I first made a small hole in the surface to start the drill bit and keep it accurate. If you don't, you'll likely get some floating on your bit and the hole won't be in the right spot. 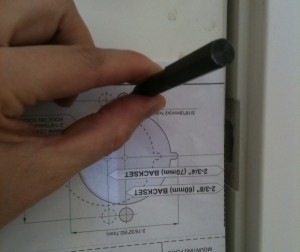 You can see in this photo below, the latch is installed in the cross bore. Those little tabs will align into the housing when you install the door lever, we'll show you how to install that in the next couple of steps. First you need to drill your holes and now that you've made a starter hole, it will be a bit easier. Make sure you're using a good drill bit designed to drill through steel as other types of bits may pull too hard and damage the surrounding surface of the hole you are drilling. If you are installing in wood doors, you may still want a starter hole just to help you keep it straight and on target. 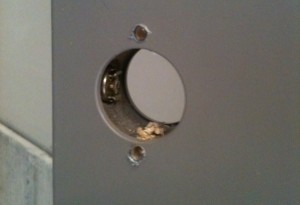 Before you start installing the lever set, you'll want to verify your door thickness. Out of the box these commercial levers will fit 1 3/4" thick doors which is pretty standard for exterior doors. If you are installing on a thinner interior door, you may need to adjust the cylindrical housing of the lock so that it will fit. To do this, you'll need to remove the outside lever with the little tool provided, pull the rosette and then twist the housing. Its hard to see in this picture but the spindle between the cylindrical housing and the rosette is threaded. As you twist the housing on the threaded core, you can fit it to your door thickness. Once your done adjusting, put the rosette back in place and slide the lever back on until the spring loaded pin pops into place. By the way, you cannot remove this outer lever unless you have a key in the cylinder, this protects you from someone removing your outside lever to get in your door. It's not possible to take apart unless you have the right key. 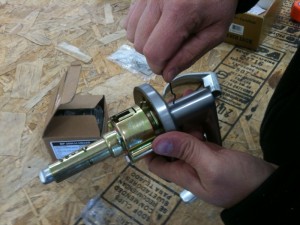 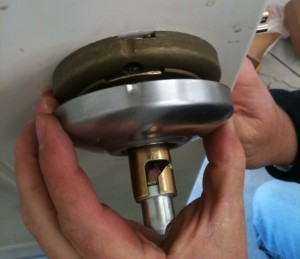 Then slide on your interior lever until the spring loaded tab locks it in place. If you ever need to remove the lock, you can use the tool provided (shown in previous picture) to depress the tab and slide the lever back off. You can also use a paper clip or something similar. As I mentioned before, to remove the outside lever you have to have a key for security reasons, the inside lever you do not. 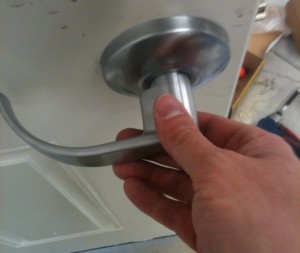 That's it for the lock. Now all you have to install is the strike. These levers come standard with a heavy duty T Strike, installation of strikes is pretty simple so we won't get into it here. I hope this article gives you a bit more confidence installing a commercial lock if you have not done so before.
SHARE THIS POST
Previous Post
Next Post