This summer for our family vacation we went to beautiful Lake Tahoe and had a great time with the kids. On one day we went over to tour a cool old castle called Vikingsholm at Emerald Bay which is on the southwest shore of the lake. This place was fun to visit and had some interesting history, and of course I checked out the architecture and cool door hardware there. 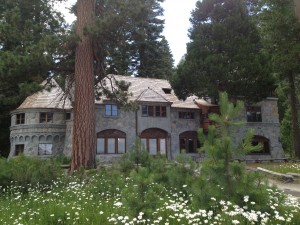 Vikingsholm was a summer home built in 1929 by Lora Josephine Knight. She bought a big chunk of land at Emerald bay, including Fannette Island, for $250,000. That's around 3.5 million in today's money. The home was built out of materials found locally at Lake Tahoe. Granite stones for the foundation and outer walls were quarried on site, and the timber for the structure was cut from that area too. The foundation was laid in 1928 and the rest of the building was completed the following summer. She had hired 200 craftsmen who lived in temporary barracks while they built the home. Vikingsholm was crafted to replicate scandanavian buildings from the 11th century. 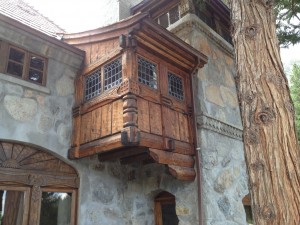 The workmanship on this place was amazing. Some of the more memorable features are the wood carvings on the structure of the home, paintings on the ceilings and walls and the hand crafted furniture. Some parts of the heavy timber construction were done with tightly fitting joinery with no nails or pegs consistent with the methods used in 11th century Sweden. 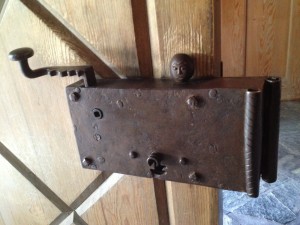 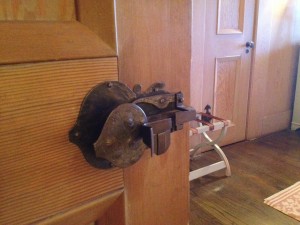 Check out the door hardware from the main entrance. The handle on the top left draws the latch. The little face on the top of the lock is attached to a pin that drops down in the lock, I couldn't tell what the function of that was. Keyhole at the bottom to lock or unlock.  All of the guest bedrooms had these sweet looking locks imported from Sweden according to our tour guide. The locksets have a latch that can be opened from the inside, but can only be locked from the outside. Apparently the idea on security at the time was that the hostess would lock all of the guests into their rooms at night and then she would lock herself into her own room. Doesn't seem too safe by today's standards, but I guess there were less problems if everyone was locked into their room for the night. 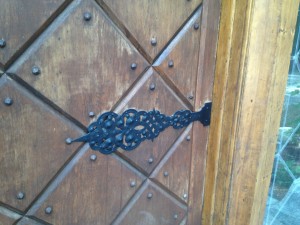 All of the doors had the cool old strap hinges on them. These hinges, along with the fireplace screens and metal light fixtures were forged by hand on site.  Vikingsholm was an amazing place. Much to be admired there as it was built in the early 1900's by skilled craftsmen. The detail on this place was unbelievable. Today Vikingsholm is owned by the State of California, its been very well preserved and is a fun place to visit. Also plan on a short hike to Eagle Falls and playing at the sandy beach, or rent a kayak right there at Emerald Bay.